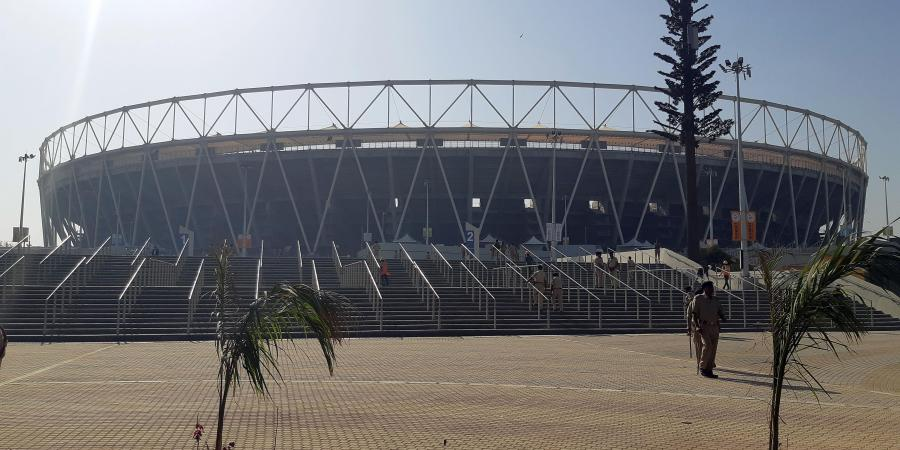 The Board of Cricket Control in India (BCCI) President Sourav Ganguly tweeted about the venue, “Lovely to see such a massive, pretty stadium … Ahmedabad .. have great memories in this ground as a player ,captain .. grew up at Eden with hundred thousand capacity.. (not anymore…”)

All the eyes are on the renovated  Sardar Patel stadium at Motera, Ahmedabad and India taking on England for the 3rd Test  today ( 23.2.2021)  in the ongoing 4 Test series.  The 3rd and 4th tests are being played here.

India buoyed with a morale boosting victory in the 2nd Test at Chepauk a week back are ready to face England for a Day-Night Pink ball Test at Motera .

“Tough to stop the juggernaut, predict an India win in 3rd Test,” reckons @MichaelVaughan in his preview for the Pink Ball Test, on #CricbuzzChatter with @bhogleharsha

According to Rohit, debating what kind of pitch is on offer makes little sense. He felt that it would be better if analysis of player performances take place.

“When we travel overseas, they also make life difficult for us. So, I don’t think we should discuss much about the pitches and instead talk about the game and players. Discussion about how a player is batting or how a bowler is bowling are completely fine but not pitches because conditions remain same for both teams and whoever plays the best will win,” he went on to add.

“There is no criticism of the second Test pitch from our point of view. That’s exactly what home advantage is and you are well within your rights to utilize that. Why wouldn’t India play on pitches that turn square and upon which first innings runs are vital? They outplayed us on a pitch that they are very skilled on but one very alien to us,”   Stuart Broad said.

Boasting  with a seating capacity of 110,000, the Sardar Vallabhbhai Patel Stadium, Motera, Ahmedabad  is the largest cricket  stadium overall on the seats.

And the great  news is that 50% of the capacity crowd will be allowed for the tests.

Lead Architect and Senior Principal, Andrew James, spoke about the vision for the design during the inauguration, with the scale of the project creating the greatest challenge, “Cricket is the biggest sport in India and this stadium has been designed to bring together as many fans as possible, creating an incredible atmosphere for international cricket, IPL matches through to regional and community games.”

Spread across 63 acres of land, the Motera Stadium has three entry points. It also boasts 76 corporate boxes with a seating capacity of 25 each, a clubhouse with 55 rooms, a gymnasium, four dressing rooms and an Olympic-size swimming pool.

And all the spectators can watch any shot played by a player from their seats.

The arena is not equipped with floodlights. Instead, LED lights have been installed on the roof.

Both India and England have not played much Pink ball cricket.  England played 3 tests and lost 2 and India played 2 and lost 1.

Harsha Bhogle observed that they may leave less grass on the pitch as happened in India’s first pink ball test at Eden Gardens, Kolkata a few years back, where there was 6mm thickness of grass was left on the surface as the norm prescribed by ICC.  He also concurred with Michael Vaughan that unlike Red cherry, the pink balls (SG balls) may not have any shine as it has pigments and lacquer which may allow swing under the twilight.

It is also a new pitch after the renovation in 2020 and this is going to be the first international match.

“It seems to be swinging more than the red ball and doing a bit more for the seamers,” Zak Crawley, England batsman said. “It seems to be a bit harder so the spinners are skidding it on a bit more as well. So it’s going to play differently than the red ball. I expect to see more seam in this game. The spinners are still going to have to play a big role. I’d be surprised if they produced an absolute green seamer. I think it will still spin quite a bit but the seamers are going to have a bit more of a chance than in the last couple.”

As there are so many unknown factors involved in this test, both teams will be weighing their options to play the best XI.  There are 11 pitches in this ground.  So which pitch is going to be used is a million dollar question and it is also a moot point how the pitch is going to behave in the course of the match.

There is a general perception that the home team wants to play its strength and so the clay pitch may be used to aid our spinners.

England may be tempted to use four seam bowlers headed by James Anderson, Stuart Broad, Archer and Mark Wood and a spinner Jack Leach.  And as far as batting is concerned, both Zak Crawley and Jonny Bairstrow will be playing with Dan Lawrence and Burns may make way for them.

For India they will go with 3 seamers with Ishant Sharma ( his 100th Test), Bumrah and Siraj or Umesh Yadav and 2 spinners Ashwin and Axar Patel as Kuldeep yadav may be dropped.  So no other change is expected in Indian line up.