Due to pandemic, Work from Home (WFH), workout from Home, Learning from Home, Cinema at Home has become the new normal and another first for consumers- STADIUM AT HOME with IPL 2020.

“The 13th edition of IPL 2020 was played without crowds or the usual glamour due to COVID-19 pandemic but the use of new technology innovations have created seamless viewing experience of fans”  felt Brian Lara, West Indian Legend , who was part of the Experts comments in the Dugout at the studio.

Lara’s words echoed the sentiments millions of viewers spread world over and kept the frenzy cricket fans in  good humour.

In Today’s Industry 4.0 age, innovation is non-negotiable.  AR is one of the products of Industry 4.0 Technologies.  AR is a type of interactive, reality based display environment that takes the capabilities of computer-generated display, sound , text and effects to enhance the user’s real-world experience.  AR combines real and computer based scenes and images to deliver a unified but enhanced view of the world.

AR graphics were extensively used in this IPL edition.  These graphics have provided a big and bold visual spectacle in the stadiums and even brought back fans in an unconventional and creative way.  These graphics have helped the cricket commentators, analysts and fans to understand how and where the ball is pitched like full , slot, yorker etc.

A virtual studio is a television studio that allows the real-time combination of people or other real objects and computer generated environments and objects in a seamless manner.Virtual studios built on Epic Games “Unreal Engineer” have been deployed to give unique environment to present the match coverage and high level analysis.  “ All the effort put in by everyone at STAR SPORTS ( who are the BCCI’s official broadcaster) has made this DREAM 11 IPL 2020 a very special one with exciting uninterrupted cricket.  The In-stadia ambience and new technology used has helped to create a seamless viewing experience and I am sure the fans are enjoying it “ , Lara said.

Incidentally, DREAM 11(the title holder of this year’s IPL) itself a Gaming platform had pipped educational companies like Biju’s and Unacademy to win the IPL title sponsorship rights for this year’s edition with a bid of Rs.222 crore.

The Fan Wall is giving an opportunity to fans to connect live to the game, and watch together in a virtual group. The broadcast integrates live, and curated fan reactions, giving fans from across the world a platform to support their heroes from the comfort of their homes.

For this purpose, fans were briefed in advance, invited by email, and given a unique URL to join the fan wall. The Star Sports team retrieved fans’ camera feeds in one click, and sent them to the stadiums to large video walls or inserted into the studios, and broadcast. Reactions were curated, and inserted into replay packages ensuring the fans are everywhere.

The Virtual Reality cricket analysis has been given to the experts as the latest in-studio tool to deliver sophisticated analysis on the on-ground action. Fans at home can see deliveries in VR right after they have happened based on ball speed, and trajectory data.

The fan engagement activation evolved into an analysis tool for experts to use on air. The original game allowed players to replay balls just after they have happened live in the match. Hawkeye ball tracking data is sent from the stadium with the exact release point, speed, and trajectory of the ball delivery, all reproduced in VR using precise physics for the player to face. This is all set in an exact reproduction of the stadium, and played using a custom made haptic VR cricket bat controller.

Disney+ Hotstar Super Over is a digital interactive quiz, where questions were asked on Byju’s Cricket Live post the toss, allowing for the highest viewership, and participation possible. Viewers logged in to the Disney+ Hotstar App to answer questions.

The Indian Premier League is taking place without a live audience for the first time due to the pandemic. But the popular cricket event still has a big virtual audience, especially on Twitter. To make the most of it, Twitter has customised some features on its platform for IPL.

As with every major occasion, IPL 2020 also gets customised Twitter emojis. Each IPL team has a dedicated Twitter emoji that can be activated by hashtags available in English and six Indian languages. Some of the hashtags for the IPL teams include #OneFamily, #WhistlePodu, #PlayBold, #KorboLorboJeetbo, #SaddaPunjab, #OrangeArmy, #HallaBol, and #YehHaiNayiDilli. Twitter has also been sharing compiled Lists of IPL teams for fans to stay updated and catch up with the latest. Interested fans can also create their own Twitter Lists by adding relevant people from whom they would want to read about the IPL. twitter has also created an IPL Topic that fans can follow for all the latest updates. There are dedicated Twitter Topics for different IPL teams as well.

There’s an events page for IPL 2020 which features a timeline of tweets and conversations on IPL. This events page is visible on top of the Twitter timeline. If that’s not enough, then there are followable Twitter Moments on IPL featuring content and stories of all the matches. 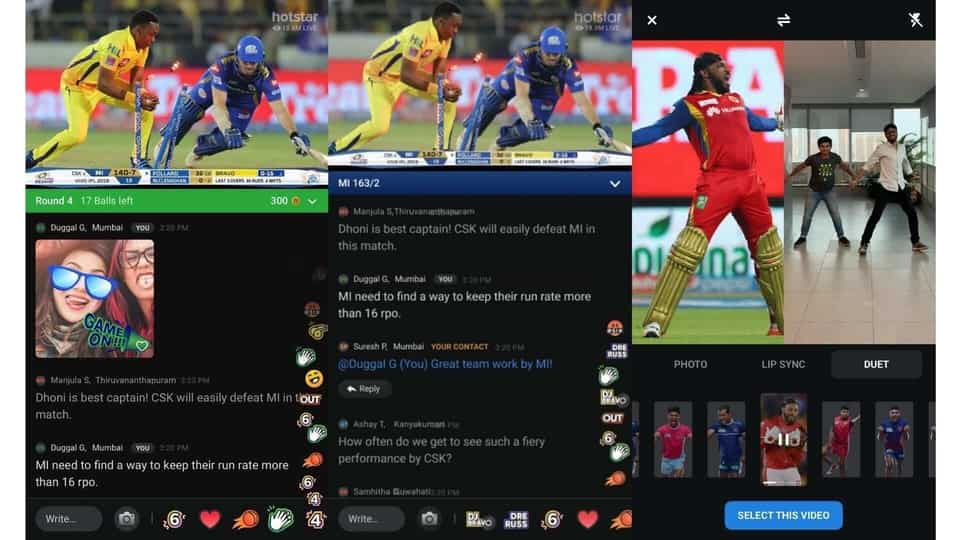 The official broadcaster Star India partnered with online-ticketing site BookMyShow to provide fans “Virtual Match Ticket” through which selected fans could be a part of live streaming of the match.

The network has put up digital fan walls in the stadium, including one in the commentary box, for every game. Around 96 chosen fans, from around the world, were a part of the match on four large virtual fan walls. For television audience, pre-recorded fan-cheer background score was used in the live telecast of matches. The pre-recorded videos of cheerleaders were also flashed across stadiums on big digital walls.

This pivot to digital has been quite encouraging. From getting fans inside a commentary box to engaging with them through online games, IPL stakeholders seem to be doing all the right things to stay connected with fans.  “Seeing M.S. Dhoni on ground was almost surreal after months,” said 19-year-old Mumbai-based college student Shikhar Dave “Our friends decided to watch the first IPL match together on Disney + Hotstar, it was fun sharing emojis and silly selfies each time a sixer or boundary is scored,” he added.

Dave and his friends were among the 8.1 million paid subscribers of Disney + Hotstar who watched the MI vs CSK match.

To keep the engagement high, the video-streaming platform was  allowing fans to join a virtual community where they can watch matches together while using interactive emoji stream. They can also express themselves using “Hotshots” selfies or a new video feature “Duets” that lets fans create customized videos showcasing their rendition of famous shots and reactions of their favourite cricketers.

Disney+ Hotstar also added some new features for IPL 2020. Its Watch’N Play social feed has been updated with an interactive emoji stream, new player emojis and a ball-by-ball prediction game as well.

Franchises were also leveraging virtual meet and greet with players, WhatsApp bots and video conferencing to give fans an engaging sports experience.

Mumbai Indians, for instance, has launched “MI Live” where fans attended team’s live studio show from their home which is being live streamed simultaneously on MI’s official YouTube channel, Facebook page, Twitter account and on a dedicated channel on Jio TV. Paltan Play in association with Samsung, is a second-screen experience game on team’s website, which allows fans to analyze an ongoing MI match and predict the number of runs to be scored and wickets to taken per over.

On the Mumbai Indians mobile app, the game has its own unique points system and a special chip. There is also a live leadership board which indicates the ranks of participants on a match-by-match basis.

Through an activity called Virtual Wankhede, fans can cheer their favourite players via video conference while they watch MI matches from home. MI Buddy is an interactive AI powered WhatsApp bot which delivers Mumbai Indians-related information, videos, games, GIFs on demand for fans on their mobile devices. Moreover, there are engagement-based activities for fans to participate such as MI Quiz, MI word puzzle, activity to create one’s own digital MI jersey and host of other activities. These initiatives aim to connect our fans virtually, bring them even closer to each other and help them to win exciting prizes. Meanwhile, Rajasthan Royals has also started a community-based programme called “Super Royals” under which 22 fans from across the world have been trained to engage with fans by devising activities across social media. These fans  were on Star Sports interacting with players through video calls and even get to do match analysis with team’s radio partner BIG FM

The franchise has also launched an app through which fans can access behind- the-scenes content, use augmented reality (AR)-backed games, win prizes and interact with fellow cricket fans.

“With the IPL occurring away from India this year, digital engagement is even more crucial to us as a franchise, and the launch of this app enables us to entertain and engage the millions of fans watching at home on TV, through their second screen,” said Jake Lush McCrum, chief operating officer, Rajasthan Royals.